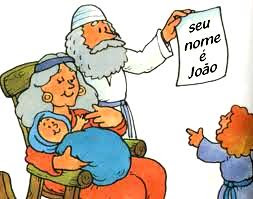 Admiration, praise and joy are the main feelings surrounding the birth of John the Baptist. In these events lands, sovereign and discreet, the hand of God, which interferes even in the choice of the boy's name (John means "God is piety"). As for the newborn, one can predict his fate by the angel's proclamation: "He shall be great before the Lord" (Lk 1,15a).
Adapted by Flávio.

1st. Reading
Reading of Malachi's prophecy 3,1-4.23-24 - So the Lord God speaks: 1"Behes, I send my angel, and he will prepare the way for me; soon the dominator will arrive at his temple, which ye try to find, and the angel of the covenant, which you desire. Here's what comes, says the Lord of the armies; 2and who can stand up to you on the day of your arrival? And who can resist him when he shows up? It is like the fire of the forge and as the barrela of the lavadeiros; 3e will stand by, as to make silver melt and purification: so he will purify the sons of Levi and refine them as gold and as silver, and they will thus be able to make righteous offerings to the Lord. 4 The Lord will then be acceptable to oblation of Judah and Jerusalem, as in the early times and in the ancient years. 23 Beit that I will send you the prophet Elijah, before the day of the Lord comes, a great and terrible day; 24th the hearts of the fathers shall turn to the children, and the hearts of the children to their fathers, that I may not intervene, wounding your land from curse." " Word of the Lord.

Psalm - 24/25
Raise your head and look, / for your redemption is approaching!
1. Show me, O Lord, your ways/ and make me know your road! / Your truth guides me and leads me, / because you are the God of my salvation!
2. The Lord is pity and righteousness/and leads sinners to the good path. / He directs the humble in righteousness, / and to the poor he teaches his way.
3. Truth and love are the ways of the Lord/for those who keep their covenant and his precepts. / The Lord becomes intimate to those who fear him/ and makes them aware of his covenant.

Gospel
Hallelujah, hallelujah, hallelujah. King and Lord of nations / and cornerstone of the Church, / come to save the woman and man, / who, one day, forms forms of clay. Proclamation of the gospel of Jesus Christ according to Luke 1,57-66 – 57 The time of Elizabeth's pregnancy was completed, and she gave birth to a son. 58 Neighbors and relatives heard how merciful the Lord had been toward Elizabeth and rejoiced with her. 59On the eighth day, they went to circumcise the boy, and wanted to give him the name of his father, Zechariah. 60A mother, however, said, "No! He's going to be called John." 61Others said, "There is no relative of yours with that name!" 62 Then they made signs to his father, asking him how he wanted the boy to call himself. 63Zecarias asked for a tablet and wrote, "John is his name." 64 At the same moment, Zechariah's mouth opened, his tongue came loose, and he began to praise God. 65All neighbors were afraid, and the news spread throughout the mountainous region of Judea. 66And everyone who heard the news kept thinking, "What will this boy become?" In fact, the Lord's hand was with him. - Word of salvation.