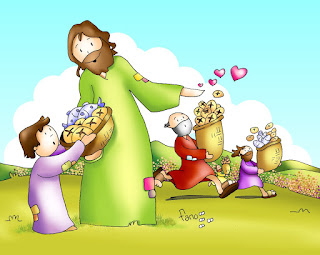 Todos comeram e ficaram satisfeitos.
Everyone ate and was pleased.

Jesus heals all kinds of diseases and feeds the hungry multitude. Christians soon understood that Jesus' gestures were not just about distributing bread and healing diseases, but they were the message of deeper healing and longer-lasting food. Jesus offers an integral salvation. Our hunger will be satisfied with faith in His Word and participation in the Eucharistic banquet. It is not by a magical act that Jesus feeds the people; He uses the bread and fish that people deliver. God meets their needs and counts on their collaboration.
Adapted by Flávio.

1st. Reading
Reading of the Book of the Prophet Isaiah 25,6-10 - In that day, the 6th Lord of hosts will give to this people, for all peoples, a feast of rich delicacies, watered with pure wine, served of delicious dishes and the finest wines. 7He shall remove on this mount the end of the chain that bound all peoples, the web into which all nations had been wrapped. 8The Lord God will cut off death forever, and wipe away the tears from every face, and end the dishonor of his people in all the earth; the Lord said it. 9That day it will be said, “This is our God, we hope in him, until he has saved us; this is the Lord, we have trusted in him: let us rejoice and be glad to have saved us. ” 10And the hand of the Lord shall rest on this mountain. - Word of the Lord.

Psalm - 22/23
In the house of the Lord I will dwell for everlasting times.
1. The Lord is the shepherd leading me; / I'm not missing anything. / Through the green meadows and meadows / he takes me to rest. / To the restful waters forwards me / and restores my strength.
2. He guides me in the safest way / for the honor of his name. / Even if I pass through the dark valley, / no harm I will fear. / You are with me with staff and staff, / they give me security!
3. Prepare a table before me, / in plain sight of the enemy; / you anoint my head with oil, and my cup overflows.
4. Happiness and all good will follow me / all my life; / and I will dwell in the house of the LORD / for everlasting times.

Gospel
Hallelujah, hallelujah, hallelujah. Behold, the Lord will come / to save his people; / happy are all those / who are ready to meet you. - Proclamation of the gospel of Jesus Christ according to Matthew 15,29-37 - At that time 29Jesus went to the shores of the Sea of ​​Galilee, climbed the mountain and sat down. 30Numerous multitudes came to him, taking with them the lame, the crippled, the blind, the dumb, and many other sick. Then they placed them at the feet of Jesus. And he healed them. 31The people were amazed when they saw the dumb speaking, the crippled being healed, the lame walking, and the blind seeing. And they glorified the God of Israel. 32Jesus called his disciples and said, “I have compassion on the multitude, because they have been with me for three days, and have nothing to eat. I don't want to send them away hungry so they don't faint along the way. ” 33The disciples said, "Where are we going to get so many loaves in this desert to quench such a great multitude?" 34Jesus asked, "How many loaves do you have?" They answered, "Seven and a few little fish." 35And Jesus commanded the multitude to sit on the floor. 36Then he took the seven loaves and the fish, gave thanks, broke them, and gave them to the disciples, and the disciples to the multitudes. 37All ate and were satisfied; And they filled seven baskets with the fragments that remained. - Word of salvation.